In the decade that I’ve led the Dye section of our Garden where Elder grows, I’ve come to know and love this plant. In the ensuing months, together, we shall explore the multifacets of this interesting herb.

Let’s begin with its name and family. The common name, Elder, probably derives from the Anglo-Saxon word Ellaern or Aeld meaning fire or kindle. Pith inside young branches was pushed out forming a tube which was then used to blow on a fire to get it going. Hence another common name for this plant is Pipe-Tree.

The genus name, Sambucus, comes from ancient Greek and may refer to sambuke, a string instrument made of elderwood. Pipes, possibly the original Pan pipes, were made from its pithy branches.

There are several species of Sambucus. S. nigra is known as common elder, European elder, or black elder and is native to most of Europe. The species in our Dye section is S. canadensis, known as American Elder, common elder, Rob elder, or sweet elder. It is native to the Americas east of the Rocky Mountains and south through eastern Mexico and Central America. Because S. canadensis is closely related to S. nigra, some taxonomists classify it as a subspecies of S. nigra under the name of Sambucus nigra ssp. canadensis.

Until recently elder was classified in the honeysuckle family, Caprifoliaceae. Recent analysis of morphological and biochemical data suggests that it should be classified in the family Adoxaceae, because it is more closely related to other plants in this family like the vibernums. Hence we will need to revise our plant label!

In our last encounter with Elder, we explored its names. What about its Use and Delight? We’ll touch on this now and go into more depth as the year progresses.

All we have to do is look at the plant in bloom and in fruit to recognize its delightfulness. Those large clusters of white flowers that turn into large clusters purple berries are truly beautiful.

And its Uses? Since our Sambucus canadensis grows in the Dye section, it likely has a dye function. Indeed the berries produce varying shades of purples, reds, and reddish browns. Leaves give tans, golds, grays, and greens, and bark produces warm creamy beiges. Perhaps, this season, we trusty dye gardeners will experiment with elder dyes.

We are all familiar with the culinary uses of elderberries. Elderberry jam and elderberry pie are longtime favorites. But what about elderflowers? Americans are familiar with elderflower fritters, but venture across the Pond to England, and a whole new world of elderflower recipes opens up. For many the central ingredient is a nonalcoholic concentrate called Elderflower Cordial.

What exactly are cordials. We know them as fruity liqueurs. Historically a cordial was a tonic believed to be beneficial to the heart, cordialis in Latin. The definition applied to Elderflower cordial is “a drink with a fruit base, usually sold in concentrated form and diluted with water before being drunk” I discovered the wonders of Elderflower cordial and its diluted forms on two trips to England in the early 2000’s. I found recipes for it on British websites and now I make it from my elder’s flowers, water, honey, lemons and citric acid.

Elder berry and flower preparations were historically used to treat colds and sore throats. These days elder lozenges and syrups are popular, widely available respiratory remedies. One of the reasons why I make Elderflower cordial.

And finally, a brain teaser! Back in the day, elder was commonly planted next to outhouses, dairies, slaughterhouses, and kitchen doors. Farmers tied sprigs of the plant to their plow horses’ harnesses. Why? For what purpose? (Answer next time!)

Thus far in our Elder exploration, we’ve learned about its names and its use and delight. Now that Spring is here we should consider how to grow it.

But first, the answer to last month’s elder brain teaser. Back in the day, elder was commonly planted next to outhouses, dairies, slaughterhouses, and kitchen doors. Farmers tied sprigs of the plant to their plow horses’ harnesses. Why? For what purpose? If you discerned that elder repels flies, you are correct!

Elder is easy to grow and quite forgiving. It likes moist fertile soil and full sun to partial shade. It grows quickly. Be vigilant, however, because it freely spreads and will overrun your garden.

The easiest way to plant elder is to purchase a plant of your choosing. There are many varieties readily available from various nurseries. If you want “basic” American elder like our Dye Section friend, Sambucus canadensis, just mosey over to our corner of the Herb Garden. We Dye gardeners can probably satisfy your desire. Since elder enthusiastically spreads by underground runners, there usually are many offshoots. We can gladly dig up one or more for you. Gratis!

If you seriously want to experiment with propagating elder, you can plant ripe berries, greenwood cuttings, or hardwood cuttings. There are internet sites and garden books that give specific instructions.

Elder requires little care during the growing season. You can harvest the flowers and do a bit of pruning to neaten up the plant. When the berries form, the clusters can be heavy, so the branches may need to be propped up. Covering the ripe berries with meshy material will prevent the birds from eating them. (But, please do leave some for the birds who serenaded you while you worked.)

At the end of the growing season, some elder experts suggest cutting the plant back. We Dye gardeners leave ours up for winter interest and to prevent water from entering the cut stems and possibly causing freeze/thaw damage to the roots. In Spring, when we see new growth. we prune the stems back to about 3 feet, remove dead branches, and shape the plant. It’s now ready for its summer debut. Please come and visit! 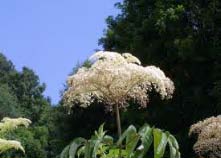 June is usually flowering season for Elder. Be vigilant! It lasts only a few weeks.

Elder flowers are my favorite part of the plant. I love their appearance. They are delightfully showy and very attractive to pollinators. Each long-stalked flower head is composed of quarter-inch white flowers in termimal clusters which are broad, flat or slightly rounded and measure from 4-10 inches across. Mrs. M. Grieve in “A Modern Herbal” (1931) (botanical.com) describes elder flowers thus. “…small white wheel-shaped, five-lobed, monopetalous corollas only, in the short tube of which the five stamens with very short filaments and yellow anthers are inserted.” 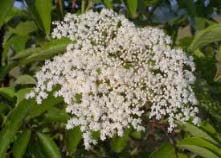 In Part 2 of our Elder Exploration we learned about elder flower’s culinary uses. There are tons of elderflower recipes for every imaginable culinary delight. Check online sources. But please please remember that any elder part must be cooked to be safe to eat or drink.

Since many recipes start with an infusion of elder flowers or Elderfower Cordial, I offer my recipe.

Into a large heat-proof bowl add:
~ About 4 cups loosely packed fresh elderflower blossoms (Be sure to shake off any insects!) with large stems removed
~ 1 organic lemon sliced (I always use organic lemons when the rind is part of the recipe to avoid any residual pesticide.)
~ 2 lbs raw honey or 3 lbs sugar (I use honey)
~ 2 tsp citric acid

Pour 1 1/2 pints boiling water over the ingredients in the bowl and stir until the honey/sugar has dissolved. Skim off any scum that rises to the surface. Cover with a cotton cloth and cool.

When cool, refrigerate and stir twice a day for five days. Then strain the syrupy liquid through a fine sieve. You can decant into sterile screw topped bottles and refrigerate. I pour the cordial into small freezer containers and freeze for future use.

This recipe makes about 5 cups. It can be doubled. For a refreshing beverage the recommended dilution is 1 oz cordial in water to make 1 cup solution. However, concentration is a personal choice! Have fun with this! Experiment! Be an Elderflower Cordial Culinary Adventurer! Enjoy!

Elder has been known for centuries as a medicinal herb. Rather than reinvent the literary wheel and paraphrase what has already been written, this month I offer you first, the words of Nicholas Culpeper, the famous early 17th century astrologer-physician. Then, the words of current researchers at the University of Maryland Medical Center.

Culpeper describes the medicinal virtues of elder thus. “The bark, leaves, flowers, and berries all have medicinal properties. The first shoots to appear, boiled like Asparagus, and also the young leaves and stalks boiled in fat broth, carry forth phlegm and choler. “The middle or inward bark boiled in water and given in drink works much more violently. The berries, either green or dry, expel the same humour. They are often given with good success to help the dropsy. The bark of the root boiled in wine, or the juice thereof drank, is more powerful than the leaves or fruit. “The juice of the root causes vomiting and purges the watery humours of the dropsy. A decoction of the root mollifies the hardness of the mother, if women sit thereon, and opens the veins and brings down their courses. The berries boiled in wine perform the same effect. The juice of the green leaves applied to hot inflammations of the eyes assuages them. The decoction of the berries in wine provokes urine. “The leaves of flowers distilled in the month of May and the legs washed with it takes away ulcers and sores. The hands washed with it helps the shaking of them and the palsy.”
from: Potterton, David, ed., 1983, , Foulsham & Co Ltd., Great Britain.

With time and research, the medicinal l use of elder has thankfully been modified. As has the language! Did Culpeper know that the raw unripe fruit as well as the leaves, seeds, and bark contain a chemical related to cyanide? Based on his recommendations, perhaps not. We can only conjecture about how his patients responded to his treatment with elder!

Researchers at the University of Maryland Medical Center have this to say about the medicinal uses of elder. “Elderberry, or elder, has been used for centuries to treat wounds, when applied to the skin. It is also taken by mouth to treat respiratory illnesses such as cold and flu. In many countries, including Germany, elder flower is used to treat colds and flu. Some evidence suggests that chemicals in elder flower and berries may help reduce swelling in mucous membranes, such as the sinuses, and help relieve nasal congestion. Elder may have anti-inflammatory, antiviral, and anticancer properties. “Elderberry also contains flavonoids, which have antioxidant properties and may help prevent damage to the body’ s cells. However, very few studies have been done in humans, so researchers don’t know how effective elder may be.”
from: U. of Maryland Medical Center www.umm.edu/altmed/articles/elderberry-002880.htm The web article lists supporting research articles. Also there is the obligatory disclaimer.